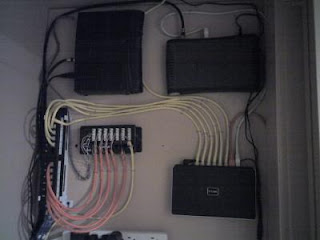 Now we have come to the point that usually takes all the fun out of blogging. At least blogging with WordPress. That point is the obligatory photo. For some reason, when we view a blog post we expect some kind of image that magically embodies the entire essence of the written material. They say a picture is worth a thousand words, so if you write two thousand I would expect you’re going to need a bonus pic. So I’m gonna pop one in here and try to arrange it to suit my extravagant taste…

The pic was easy to upload to the included Picasa storage space. ( 1 Gig) Maneuvering the photo is not as easy as I would like. I can’t say that it is any more difficult than WordPress. I could probably edit the html and get the pic right where I want it, but I don’t really want to go through the effort. And I shouldn’t have to.

What you can see in the photo is a network panel I set up for a small office. Came out pretty nice. Six network runs and five, two line phone runs from a VOIP router. What is not in the photo is the WiFi network wireless access point. It is mounting on the ceiling above the equipment. I used one of those new D-Link “green” (as in: energy saving) Gigabit network switches Model DGS-2208. It is mounted lower right. I have 2 of these at home and they seem to work fine but they do not work well in an office environment with network applications. For some reason the ports randomly go to sleep and the PC’s start reporting network storage device failures. Not cool. Though it does run cool. I love to save energy but not at the expense of reliability.

Back to the blogging features… I cannot seem to find the page break feature that allows a portion of the post to be shown on the main page of the blog, while only showing the complete post when the reader clicks the “read more” link. I like this feature because then people don’t have to wait for the whole long page page of posts to load.

This entry was posted in Networking. Bookmark the permalink.